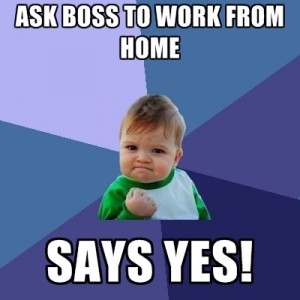 Trends show that working from home, or working from “virtual offices” are a growing trend. It makes sense, because with modern technology allows those with office jobs and the like the ability to connect to the office from the comfort of home.

The problem with working from home is END_OF_DOCUMENT_TOKEN_TO_BE_REPLACED

You’ve seen the new DSLR cameras at every children’s party, and you’ve probably seen the vast amount of untrained (and mostly untalented) newbie “pro” photographers cropping up all over Facebook and on Wix websites. Everyone with a $900+ camera is a photographer, right? Well I’m here to tell you that while, yes, technology has improved our collective abilities to capture those special moments in our lives, there is a charm to the horrible family photos hiding away in your (or your parents’) old photo albums.

Check out the two photos here. Neither one is going to win this forgotten family photographer the World Press Photo of the Year award, but there is a certain something that’s been captured which the family will treasure and value forever. That treasure is END_OF_DOCUMENT_TOKEN_TO_BE_REPLACED

You have seen the FedEx logo before many times. You may have even noticed the tiny arrow hidden in there. You have seen the colors. Maybe you like it, maybe you think it’s boring, maybe you think it’s brilliant. I’m in the latter camp. I think, personally, that the FedEx logo is one of the best pieces of branding ever created. It’s my duty to explain why this is so amazing; END_OF_DOCUMENT_TOKEN_TO_BE_REPLACED

This has to be one of the best advertisements of all time. It’s the rare and perfect example of the right ad for the right response with the right placement. The stars align only so often, and for this situation they aligned perfectly for BMW.

Right here in Los Angeles, Audi threw down the advertising gauntlet and challenged BMW to respond to the all new Audi A4. Audi claimed that it was a step up from BMW. “Your move, BMW,” read the billboard on the Sunset Strip, and featured an all black Audi A4 against a clean white background. Oh, yeah. It was on now. S#!t just got real up in here…as the kids say.

One of the local BMW dealerships saw the billboard and responded perfectly and with finality. Santa Monica BMW secured billboard space near the Audi billboard and placed an all white BMW against a jet black background and simply put the word, “Checkmate.”

There is a new internet phenomenon making it’s way through it’s 15 minutes. “The Harlem Shake” started as a silly, kooky video, but it’s subsequent video memes actually have root in another (and older) form of entertainment…joke telling. In particular, a very old joke which all comics love putting their person touch on. That joke is called, “The Aristocrats.”